I know this is supposed to be light and funny, but life isn't always like that. I heard about a lady in her early 50's tragically passing away on a bike track I frequent. (To see a photograph series of articles on the track, click here to start with part 1. ) I went out on my usual ride and found the spot because flowers had been left there. My sympathies to the family and friends.

The surprise I got was it is at a spot a week or two earlier I nearly collided with a tree. The terrain slopes down, then turns over a culvert and then turns back again, making an S shape. It used to be a ditch which made me slow down, but with the drain installed you don't have to slow down now. I was going a bit too fast, took a line that was too much to the right and then quickly had to correct my line as this tree beckoned. A little skidding and I missed it by about a foot (30cm). No big deal and I carried on, but then to find that very tree with the tribute around its base was a surprise.

I went to the local council afterward who manage the track and explained what happened to me and wondered if that was what happened to the lady. Apparently her situation wasn't to do with colliding with anything, just a medical misadventure. They promised to look at a slight realignment of the track. The pictures of the site are below. they are over exposed bit it was hot and bright at the time.


It doesn't look a problem in the photos, but the photo makes the distance look much more than it is. Allowing for that, going too quickly, taking the wrong line, then suddenly breaking and changing direction was a wake up call. Cycling should be safe and caution is essential. If a track is changed, then over familiarity can be an enemy.
Posted by RayCee at 12:05 PM No comments:

Email ThisBlogThis!Share to TwitterShare to FacebookShare to Pinterest
Labels: Outdoors

Blenheim is the main town in the Marlborough region. It's not too big, but has plenty of stores to choose from and a sunny reputation.

This is the modest town clock in the centre of town but there is a larger one in Seymour Square nearby. The forum and rotunda are somewhat obscured to the right by trees. 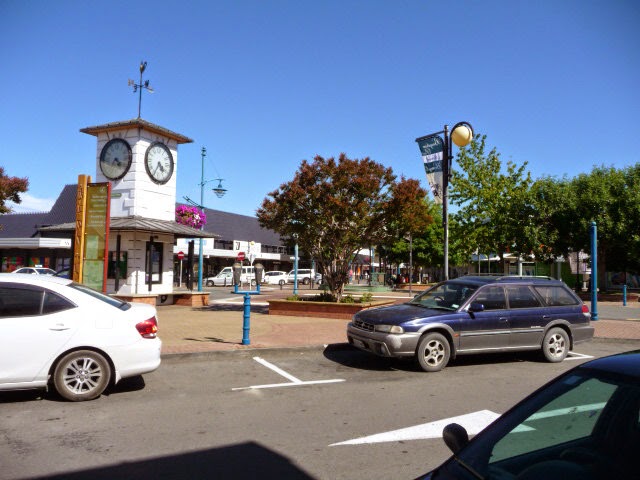 This shot looks back the other way and from a height. Looks rather empty today, with just one young lady enjoying the sun. 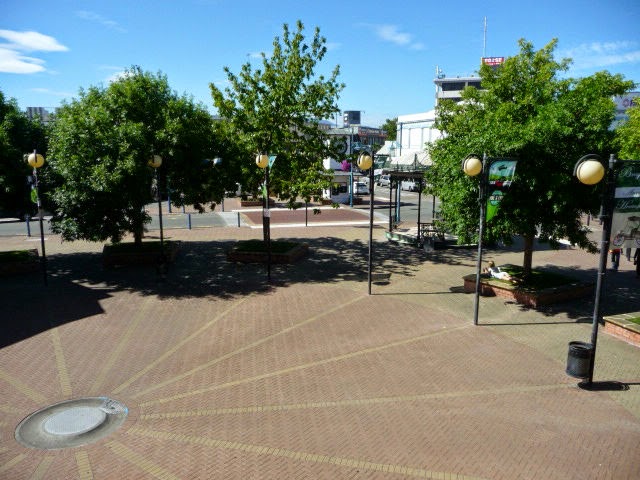 Main St is not easy to photograph effectively. The hanging baskets look nice. 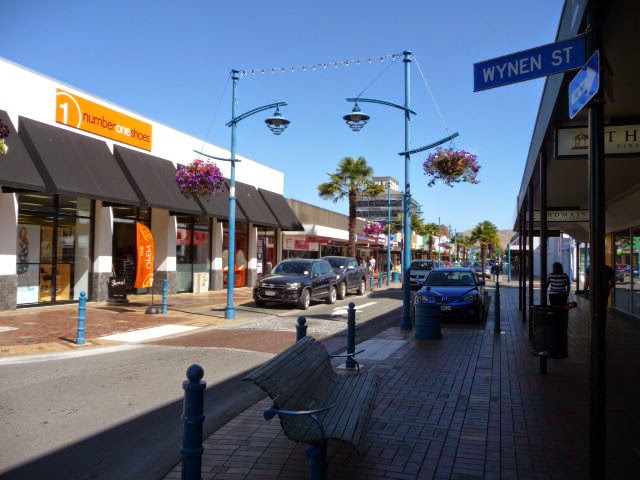 Just to the north of the city centre is the Taylor River, looking eastward. The new sculpture rotates in the wind, both the leaves spinning and turning over with the wind that the town is famous for. The temporary fencing at the lower right of the photograph contains the new theatre centre. 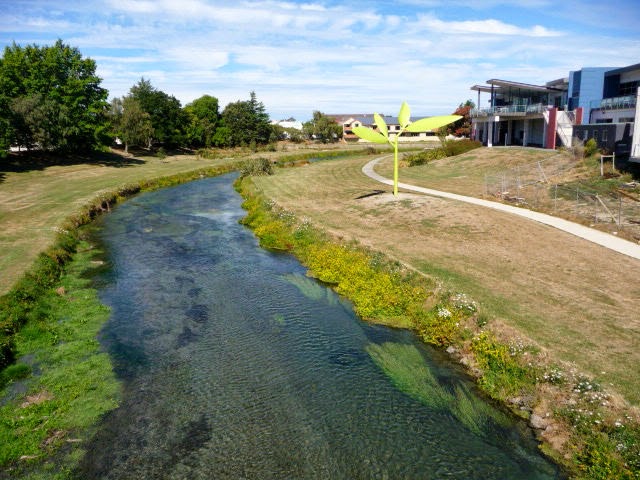 A closer view of the sculpture. 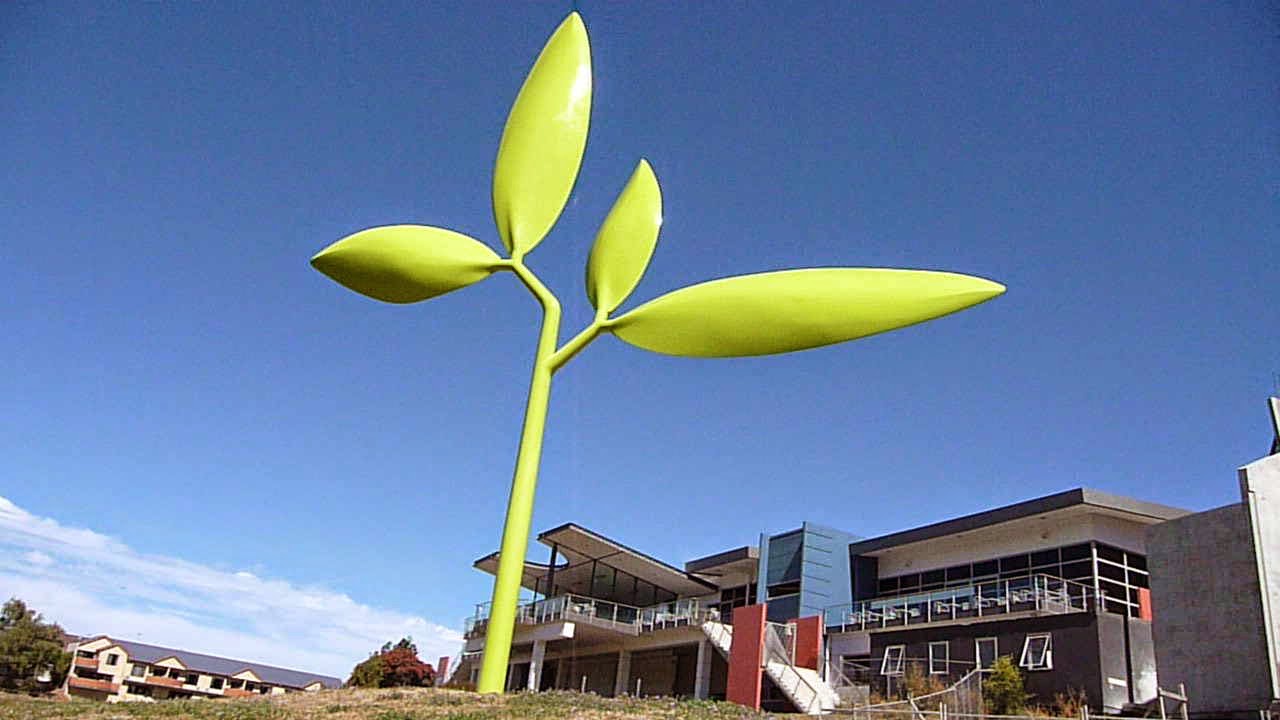 Here is the theatre under construction. It will seat 700+, and be completed by May 2015. 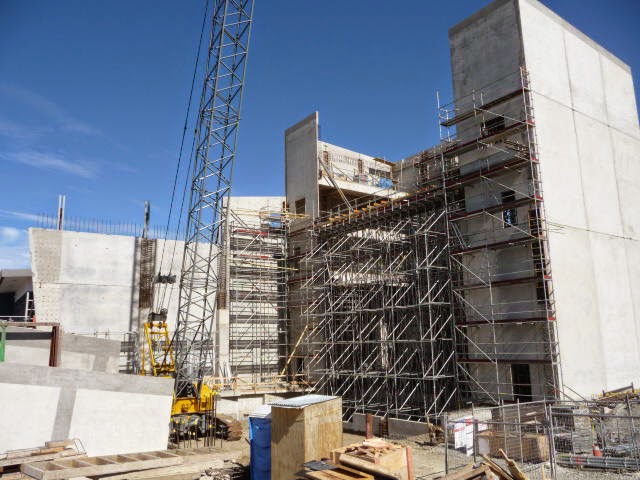 This series of pictures starts at the top of the street and works down, sometimes looking one way and then the other. They were taken early 2015, on a warm summer's day in what is proving to be a hot season.

First up is the Church Steps from Trafalgar Street up to the bell tower of Nelson's Christ Church Cathedral can be seen to the right of the picture. A bar and eatery are to the left. 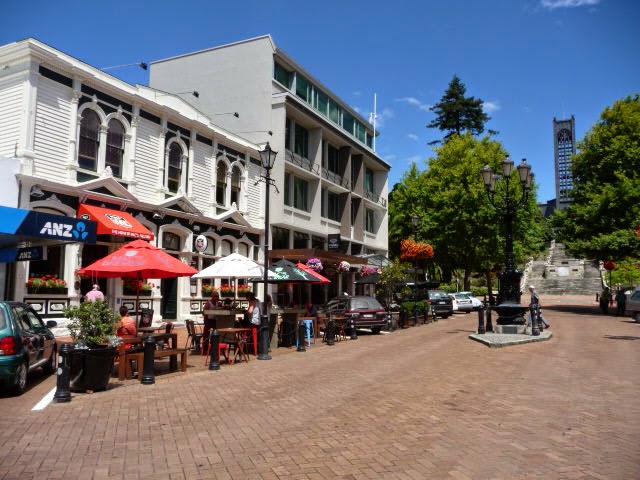 I swivelled around and took this photo in the opposite direction, looking down the main street. 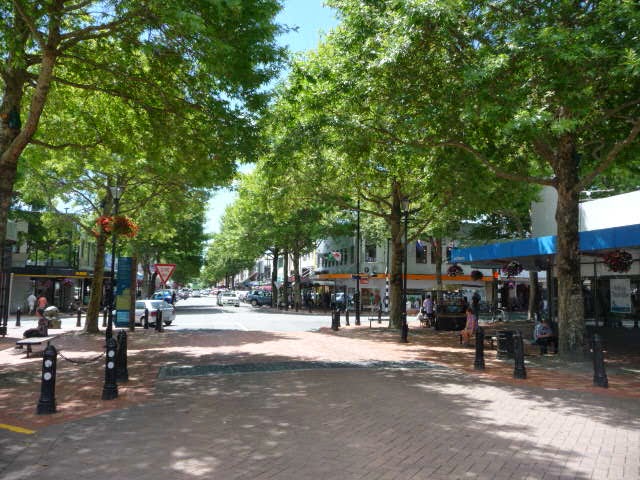 From another intersection looking back up Trafalgar St again. 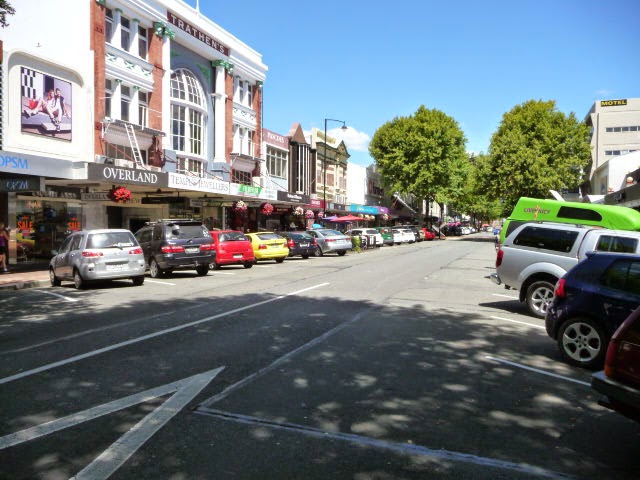 Again swinging around and looking the other way to the last pic. 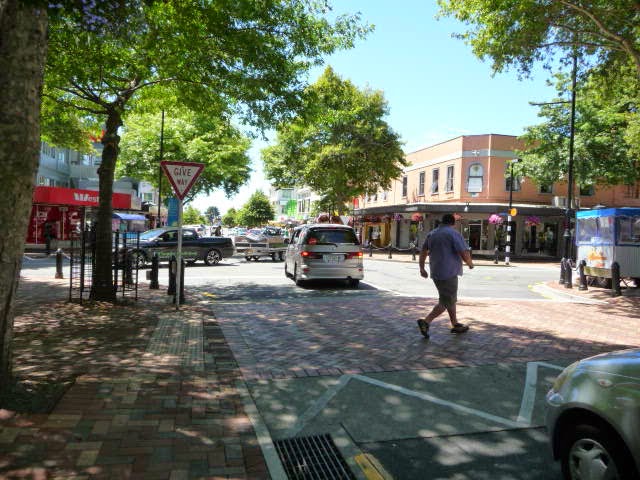 Finally, looking up the street from further down the road. 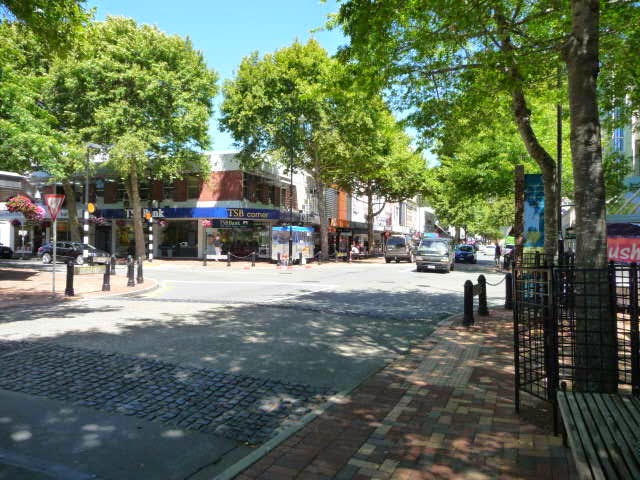 Posted by RayCee at 7:54 AM No comments:

Two With One Blow

At the moment we are having warm weather, which flies like. They are not a plague but they are around. We get an annoying small fly that likes to walk on everything. We are also a country where fly screens are not common. So when you open up the house, these cocky, pesky visitors come in.

I am handy with the swat so they meet their match when they arrive at our house. The other day one was in the kitchen, making a nuisance. I grabbed the swat and took a swing that collected it in mid-air, taking it to a premature end. Just as I did so, another fly came into the kitchen and flew in from behind me. As I dealt to the one mentioned, the other was caught by the swipe and perished as well. Two down with one blow.


There were no other flies in the kitchen, so taking out the only two in the room simultaneously was a testament to the quality of the wrist action (but also fortuitous I must admit). However, the line is well and truly drawn in the sand. Flies, enter our house at your peril. If only they could transmit this information to other flies, then a fly free house would be ours. They can't however, so the carnage must continue. My undoubted fly-swat skills continue to be honed on the battlefield of our kitchen.
Posted by RayCee at 8:10 PM No comments:

Email ThisBlogThis!Share to TwitterShare to FacebookShare to Pinterest
Labels: Story 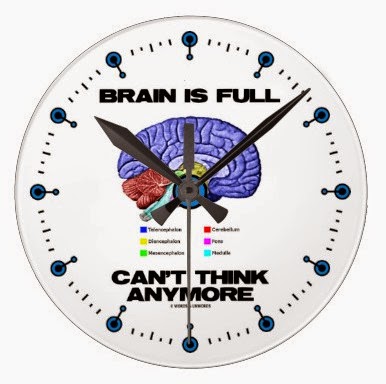 Brains of older people are slow because they know so much. People do not decline mentally with age, it just takes them longer to recall facts because they have more information in their brains. Much like a computer struggles as the hard drive gets full, so, too, do humans take longer to access information when their brains are full.

Also, older people often go to another room to get something and when they get there, they stand there wondering what they came for. It is NOT a memory problem, it is nature's way of making older people do more exercise.

Misplacing things is also very useful. Finding spectacles, car keys, dentures and other essentials is excellent physical therapy. It also helps with cognitive exercise as one thinks, then retraces their steps to locate the missing object.

Older people may appear to struggling with issues of the mind, but understanding what is going on is an important step to relating to older folk.
Posted by RayCee at 5:34 PM No comments:

How To Prepare A Husband 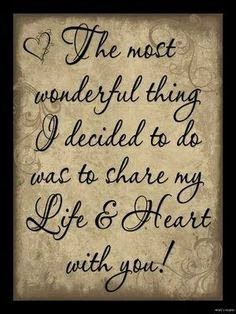 A recipe my wife wanted me to share with you.

Be careful with your selection.
Do not choose too young.
Even poor varieties may become sweet and tender.

Avoid getting them in a pickle or hot water. It can make them hard, sour or even bitter.

Marinate with patience and season with kisses.

Wrap in a covering of love, warm with domestic devotion and serve with peaches and cream.

Thus prepared they are tasty and appealing.
Posted by RayCee at 12:22 PM No comments:

Why Can't I Tickle Myself?

If a person tries to tickle themselves, nothing. Get another person to do so and it all changes. Why? It is the way we were designed. Imagine if every time we touched ourselves we got a ticklish sensation, it would make everyday activities difficult. So when we go to move, the body realises it is us and dampens the part of the brain that gives the ticklish sensation. When someone else touches us in a ticklish way, that part of the brain remains sensitive.

Tests have been done to try and trick the brain into allowing the ticklish sensation when we try to do it. So far they have been unable to do so. People can even start laughing before they have been tickled by another person approaching with that clear objective. Something about the brain reacting to other people seems the basis for ticklishness. The fact that experts are puzzled by it shows how amazing our brain is. We scarcely know anything about it. The design behind it is pure genius.
Posted by RayCee at 9:57 PM No comments:

Things Were Different Before The Great War 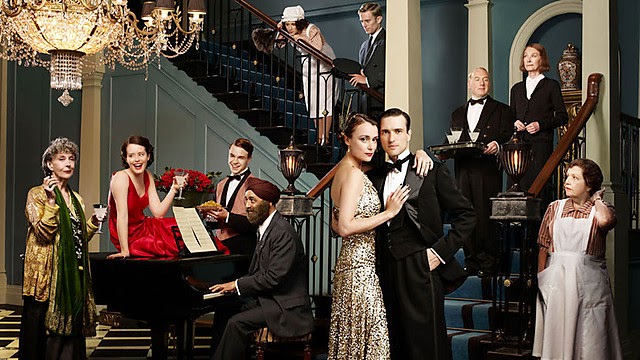 Some may feel that WWII defined our society. No. WWI did that. Things were so different prior to that horrendous event that commenced in 1914. It was not only a damning indictment on human leaders but changed world structures and moral standards. Mostly for the worse, but some for the better. One of the better changes I will relate through a true story.

My great grandmother was born into a 'well to do' family in Liverpool, England. She fell in love with a tailor. She was told she had to marry someone matching her social status. When she insisted on following her heart, it was pointed out she would be disinherited. She accepted that and they became my grandparents. I am led to believe she never saw her family again. They themselves had a family, my grandfather was the fourth of six, born in 1890.

While he was still young, a request came that the family wanted to see my then infant grandfather. A carriage arrived with horses and footmen. He was taken to a large house with big gates. He went inside where he was given food and drink, while the family stood around and discussed who he looked like. Later he returned home in the same manner. That was the only time he went.

Such was the social divide of the day that if you belonged to the upstairs part of society, you stayed there and people in the lower level of society knew their place too. To cross that line was a shame on the family of the upper class. WWI did break down that society to a degree, although it probably still exists even now to a lesser degree.

That was the way at the turn of the 20th century. I don't believe that any person is better than another by birth or wealth. Despite that, I don't judge them because that is what they knew and it was normal to them.  However, even today if you enter a relationship with someone of a very different upbringing, you need to know such a difference is one you can be comfortable with. That's common sense. Oh, wouldn't it be nice to live in a world with nothing to divide us.
Posted by RayCee at 1:40 PM No comments: 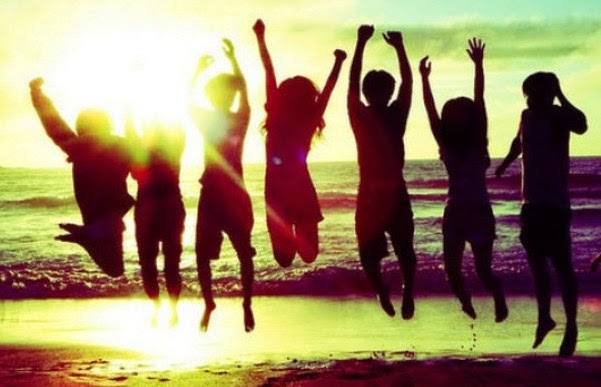 Light 'n Funny Plus Opinion has been around a few years now, originally without the 'Opinion'. But what's a man without an opinion? So I added that too. Hopefully the content of the latter doesn't detract from the theme of happiness and fun. The 'Opinion' is about caring and wanting the world to be a better place. 2015 could be the year of big changes for the better.

2015 may have less jokes as good ones are hard to find. I've done them already! Any suggestions are welcome. If you have anything you would like me to cover, just ask and I will see what I can do. If you want to provide pictures as well, all the better. I like to use pics about 100 kb or less so the page doesn't take so long to load. That could be an issue in some locations.

So feel free to pop in any time and peruse the site. I hope you find it easy to navigate. Again, any suggestions on that will be actioned if possible. Take care.
Posted by RayCee at 12:43 PM No comments: