This seal was trying and trying to get on to a boat moored by a floating salmon farm. After several attempts, it made it. See the sequence below, captured by yours truly.

Posted by RayCee at 2:29 PM No comments:

I was sitting in my car in a residential street when I saw a tabby cat walking along the road near a small wall. Crouching behind the end of the wall was a black cat waiting for the other cat to arrive. I wondered if this was a game these two felines played or was something more serious.

When the tabby reached the corner, the black cat leapt out and challenged the wandering moggy. There was a standoff for a little while, as you see in the picture below. I decided to end the confrontation by getting out of the car and approaching them. The tabby ran across the road and the black cat chased it part of the way before returning to its property. 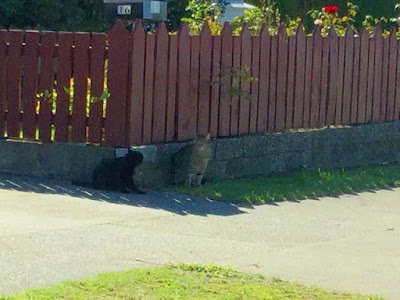 My camera on my ipad doesn't like darker settings so the picture isn't very good but it does capture the tense situation. Cats are very territorial and will aggressively defend their patch.
Posted by RayCee at 1:12 AM No comments:

We have had a wasp problem in NZ. It's not as bad as it has been but they are still somewhat of an issue. They are predatory in nature and are usually the perpetrator but sometimes the victim as well. Here is a case of the latter.

The wasp has got itself tangled in a spider's web. As I noticed it, a spider came running out to see what was for dinner. I was about to go out, so left it at that. When I came home, nothing was there so I cannot be sure of the outcome. However, for the brief time I observed the situation the spider seemed unperturbed at what was entrapped. 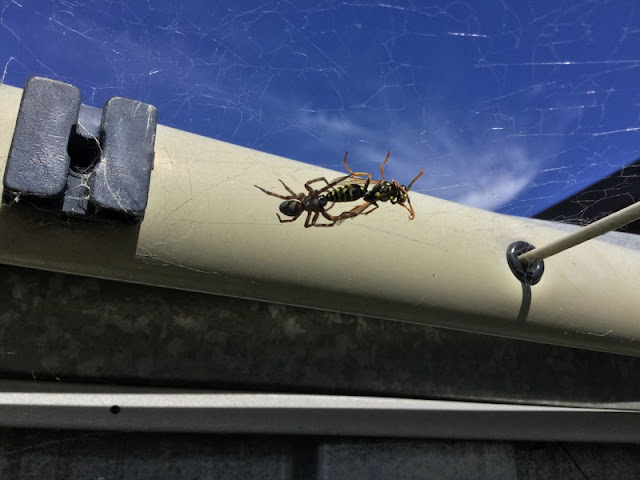 Posted by RayCee at 1:10 AM No comments:

I have been married to my cariad (Welsh for sweetheart) for thirty three years. We saw this on someone's fence, showing their address. It's made of china cups. We thought it fitting to take a snap as we had just celebrated our anniversary. 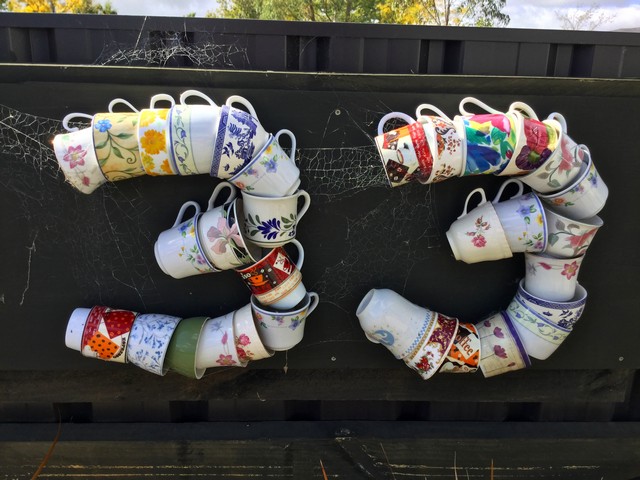 Posted by RayCee at 1:03 AM No comments: