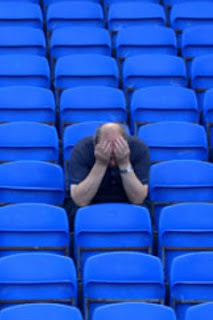 Competitive sport is great...but only if my team is winning.

I want a free society...but only if it is for those I agree with.

Indulgence in food is great...but only if I don't pay for it later.

I desire a strong man in my life...but only if he yields to me.

Democracy is great...but only if the majority agree with me.

I'm OK with gossip...but only if is not about me.

Rubbish dumps are essential...
but only if they are nowhere near where I live.

Any style of clothing is fine by me...
as long as its not naff*.

*British slang meaning lacking taste or style.
Posted by RayCee at 11:33 AM No comments:

This is about a restaurant in Germany where the portions can be large, very large. For some reason, this is considered to be a challenge that needs conquering. The truth is, we are designed to eat little and often. Over-sized portions are not good for us. Repeatedly overeating is very bad for our health.

It is an XXL restaurant in the Frankfurt area. Steaks can be over a kilo, as can chip portions. Apple wine up to 1.7 litres, beer up to 2 litres and Bacardi Cola up to 8 litres according to the website. If I drank that much, I wouldn't have room for anything to eat. Of course, normal portions are available and that is what I would be choosing.

Posted by RayCee at 3:11 PM No comments:

My mother used to recite this poem and she did so often. When done softly and with feeling, it is fascinating. Mum used to say it to me when I was in bed and about to go to sleep.

Little boy kneels at the foot of the bed,
Droops on his little hands, little gold head.
Hush, hush, whisper. Who dares?
Christopher Robin is saying his prayers.

"God bless Mummy, I know that's right,
And wasn't it fun in the bath tonight,
the cold's so cold and the hot's so hot.
God bless Daddy, I quite forgot.

If I open my eyes just a little bit more
I can see Nanny's dressing-gown on the door,
It's a beautiful blue but it hasn't got a hood,
God bless Nanny and make her good.

Mine has a hood and when I lie in bed
I can pull the hood right over my head,
I shut my eyes and I curl up small
And nobody knows that I'm there at all.

Thank you God, for a lovely day,
And what was the other I wanted to say?
I said, 'Bless Daddy', so what could it be?
Now I remember: God bless me".

Little boy kneels at the foot of the bed,
Droops on his little hands, little gold head.
Hush, hush, whisper. Who dares?
Christopher Robin is saying his prayers.
Posted by RayCee at 9:53 AM No comments:

When I was young, one of the regular card games we played was No Nines. Whenever I teach new people, they pick it up quickly and really enjoy playing. Few people know it.

Objective: To run out of cards first.

Set up: Take a standard 52 card pack. Remove the four nines and keep one joker, which becomes a wild card that can be any number you want. Suits are irrelevant. Deal out the cards individually, the last person will get one extra card than the others. That person will also lead off.

Playing: The first person plays say an Ace (which are low, not high as in most card games), then two, three...for as long as they can. A player must play a card as part of a sequence if they are able.

Of course there is no Nine, so the eight is what you would call a stopping card. They are useful as that player can now start off again anywhere they wish. They perhaps play "Ten, Jack, Queen, King". Another stopping card. Then "Ten, Jack, no Queen". So it would continue until someone runs out of cards.

Tallying up scores: Ace is worth 11 points, Ten and all picture cards ten, with the rest face value (a six worth six for example). Four rounds are played and the person with the lowest points declared the winner.

The Joker: It can be used at anytime, as any card, when it is the holder's turn to play. If a person is able to run out by playing the Joker as their last card, that means all other players double their score for that round. So there is incentive to hold it back to the end if possible. However, get caught with the Joker in your hand and you then have to double your score.

The Joker can also be played as a Nine, so if someone says "Eight, no Nine" and is about to run out, the player with the Joker can quickly use it as a Nine so as not to be caught with it. The Ten would then follow the Nine played, whoever next is able to do so.

The person who initially leads off for the first time can - if they choose to do so - play a multiple of the first card only. For example, a person has three Aces, not good as they are starter cards (also the Ten). They are easy to get stuck with. So they play "Ace, two, Three, no Four" and in doing so they could play three Aces at that time. Thereafter it is always only one of each number played. It is a bonus offer to the lead player for the first card down only. If it doesn't suit, then the player is not obliged to do so.

Best played by four people. Enjoy, and if you have any questions, please leave a comment.
Posted by RayCee at 8:22 PM No comments:

I recall when I was young down at the Devonport (Auckland) wharf, watching people with big nets hauling in copious amounts of tiny fish. You could peer down into the water and see masses of them swimming around the poles that supported the wharf. So many were caught that the value was minimal and you can only eat so many of them.

Some people would take them home, dig trenches and use them as fertiliser, a practice that disgusted my parents. They were not knowledgeable conservationists but they understood excessive harvesting of any animal is not sustainable, but especially morally wrong.

The creature in question is the whitebait, which are immature fish fry. They often travel together in schools, presumably for protection. They are a vital source of mature fish stock, which should be allowed to grow into full sized creatures if not for eating.

The despicable practice of using them for manure or on selling has led to a shortage in New Zealand, forcing up prices to ridiculous levels. There is a season for catching them and limits on how you can catch them. These are often flouted by greedy private opportunists, who on-sell them for much personal gain. I would have thought banning private selling would reduce the catch and lessen the rule breaking harvesting. 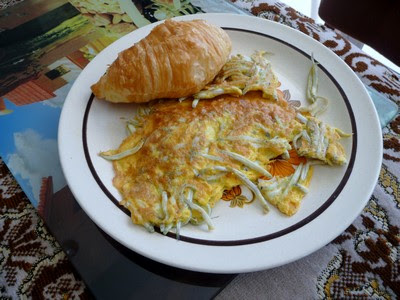 I have no problem with catching whitebait if it for personal consumption. While they are quite tasty, I could live without them and have for many years. I recently had some given to me by a person who refuses to make money from them, sharing with friends on occasions. I wish there were more Kiwis of that disposition. Fried with egg and in this case with a croissant (unusual I admit but it worked), a pleasant lunch time treat.

That said, I would happily see a ban on their catching altogether if fish stocks were being harmed. Those who abuse the privilege of responsible fishing of these tiny creatures may cause that to happen one day. Greed simply isn't sustainable.
Posted by RayCee at 11:34 AM No comments:

Email ThisBlogThis!Share to TwitterShare to FacebookShare to Pinterest
Labels: Outdoors

At the top east of the South Island, there are the Marlborough Sounds. The gateway to them is Picton. The road running west from that town is the Queen Charlotte Drive. The photos below start from part way along the Queen Charlotte drive at Ngakuta Bay, ending up at Picton.