The first of the class of 2017 have come to maturity and flown the nest. It came out of the chrysalis last evening and we left it until the morning. Then when the heat was in the sun, we put it outside. The wing opening increased in frequency and after a while it was gone. Here are two pictures of it this morning....

PS. As of the evening of the 29th (NZT), the 6th butterfly came out of its chrysalis. Three of those came in one day! Then on the 1st of May, two more arrived. One came from a chrysalis half the usual size. Unfortunately that one didn't have properly developed wings and couldn't fly. Seven out of eight isn't bad. 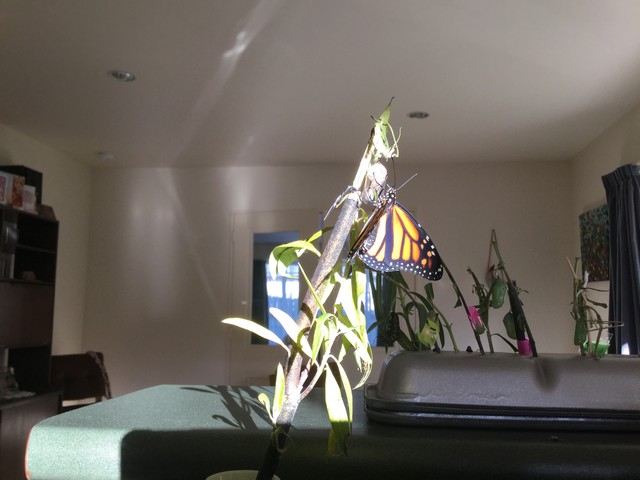 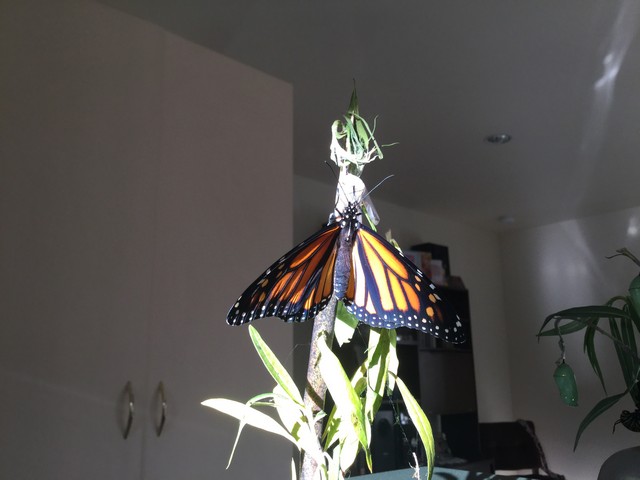 Email ThisBlogThis!Share to TwitterShare to FacebookShare to Pinterest
Labels: Butterflies

Eight caterpillars have turned into chrysalis' and one is curled up ready to become one. The metamorphosis that goes on with this tiny creature leaves me in awe of the Designer behind it. 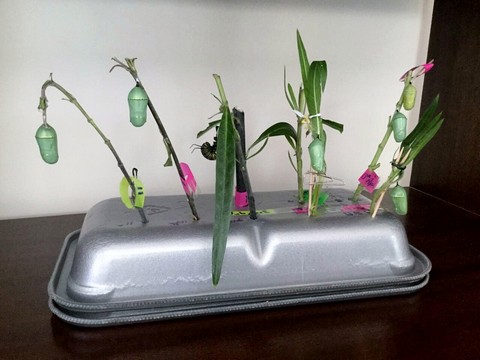 Posted by RayCee at 1:09 PM No comments:

Email ThisBlogThis!Share to TwitterShare to FacebookShare to Pinterest
Labels: Butterflies

Monarch Butterfly Caterpillars - They're Back In 2017

We were getting no caterpillars on our swan plants this year. Then we heard aggressive predators were decimating the eggs and tiny caterpillars. Then late in the season we started seeing small caterpillars so decided to bring them inside to give them a chance. We had the edge of a storm pass through and now the weather is cooling so all in all a good decision.

What we didn't bank on the was the number of late arrivals. We now have fifteen little critters on the conveyor belt. Two are in chrysalis stage and one curled up ready to join them. The caterpillars range from large to tiny. Some of the fatter ones are in the picture below. 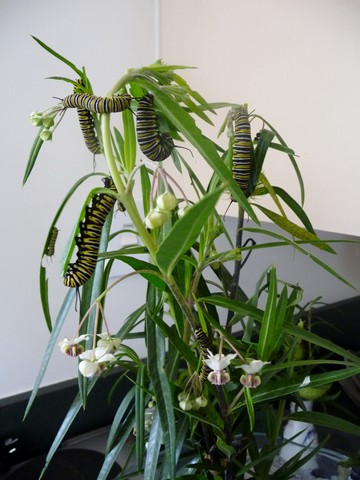 One amazing incident went as follows. A smaller caterpillar was toward the end of a leaf munching away as they do, while a large one was chewing away near the stem. I thought I hope it doesn't go all the way through. When I came back a few minutes later, the big one had indeed eaten right through the leaf, sending the leaf and smaller caterpillar falling.

However, a silky strand stopped the leaf falling far. The leaf was suspended in mid air with the smaller one still eating away on a leaf detached from the plant except by a thin lifeline of silk. I took  a snap, then rescued the little fellow. You can see the predicament pictured below. 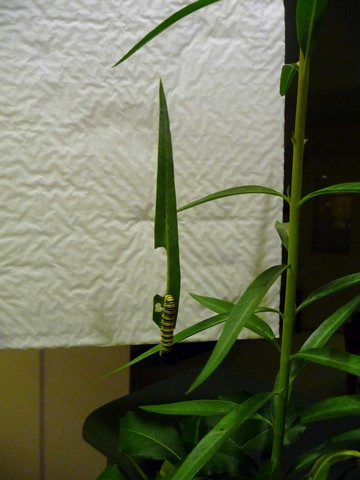 Posted by RayCee at 7:52 AM No comments: